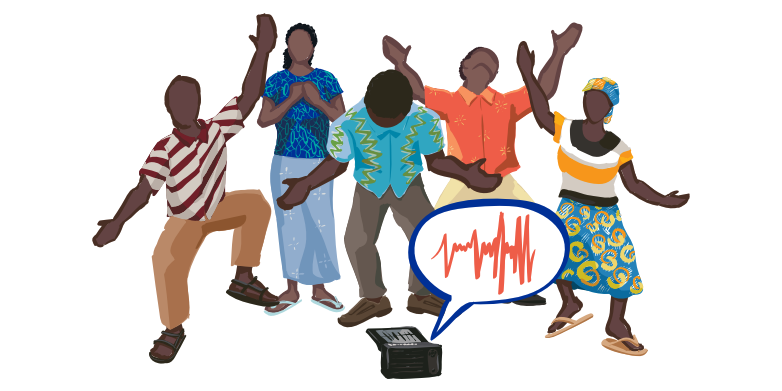 You are able to read this blog. Maybe you read your Bible this morning, or a newspaper, or magazine. Maybe you read them all online via apps. You read texts sent to you from loved ones. You read emails at work. You might have ‘liked’ a Facebook post you recently read. In your daily life, reading plays a big role in how you communicate, process information, and relate to the world around you.

What would your life be like if you couldn’t read? The majority of people in the world today don’t read. Their primary means of communicating is through the spoken word. They are oral communicators.

What if your spoken language had no alphabet? There are more than 7,000 known languages. Of these, an estimated 1,600 have no written alphabet. They have no Bible.

Oral people groups have been around since the dawn of creation. God Himself spoke the world into existence. That should tell us there is power in the spoken word. Jesus spoke to crowds of people, teaching them about the Kingdom of God. People listened, then told others, and the Word spread.

In 1526, the first English Bible was translated in written form. In 1917, Cameron Townsend set foot on Guatemalan soil and began his journey that helped birth Wycliffe Bible Translators and the Summer Institute of Linguistics (SIL International)—and the Bible translation movement in general. Townsend saw the need for indigenous people to have the Bible in their own language. Since then, missionary teams have lived among people groups for years to understand their language and culture, so that a written language could be developed to begin translating the Bible into it. Literacy education was required, because the end product was written text.

When new technology comes on the scene, it challenges us to think about how we currently do things, and how we could be doing things, which leads to the development of more new technology. It sparks the imagination and the what if questions arise. Think of the phonograph, cassette tape, compact disc, and MP3 player. Audio technology has come a long way since 1877 when the phonograph was introduced. So has Bible translation. Missionary teams are still going into the field to live among people, study their spoken language, develop a written language, translate the Bible, and teach them to read. However, advances in technology have allowed a new way to emerge. A way that focuses on the wisdom and abilities of the oral communicator—the one who speaks the language being translated.

Faith Comes By Hearing (FCBH) has been recording the Bible using the available, written, translated languages of the world. We’ve done this work for decades, knowing that the majority of people in the world are oral communicators and need to hear God’s Word in their mother tongue. In 2012, some interesting what if questions surfaced.

What if we could use audio technology to help advance Bible translation work?

What if we included and empowered the oral language community in this process?

What if we could get Audio Scriptures to an oral people group much sooner?

These what if questions then led to the how.

How can current recording methods and technology be harnessed with the knowledge and wisdom of Bible translation organizations to develop a way to translate the Bible orally?

Render is an oral Bible translation software. It was developed with the end user in mind—the oral communicator. Its colored icon interface allows an oral person to listen to Scripture in another language they understand (which has already been recorded), and then translate it, orally, into their own language. The software records the spoken translation, and takes it through the various stages that adhere to Bible translation methods, such as peer review, back translation, community testing, and consultant checking. Render combines these time-tested standards with new technology to deliver a solution for oral Bible translation.

So where are we now?

The majority of people who speak the estimated 1,600 languages with no Scripture available are unaware that Jesus Christ came to die for them so that they may have eternal life. They have no idea that He loves them and speaks their language. But that will change. Oral Bible translation combined with new technology, like Render, are providing solutions that will allow people who communicate orally be a part of the process that provides God’s life-giving Word in their own language.

Moving forward, we all must ask, what’s next?


“What a blessing for me to have the opportunity to give these people the Word of God in their own language so they can share it with the people of their village!”