Bible Blog › From the Field › An Audio Revolution 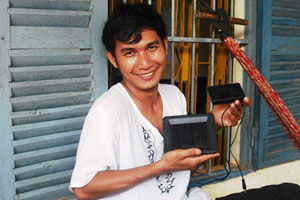 Can listening to God’s Word in audio change lives? Absolutely! In fact, Ted Olbrich, the director of FCOP International, a partner who has been working in Cambodia for years, believes the Audio Bible is the cutting edge of a revolution as powerful as the invention of the printing press.

Pastor Ted says when the first Proclaimer arrived he thought it was a cute gadget much like the cassette players he was familiar with. He and his co-workers realized the power of this unique tool as they watched the Audio New Testament draw people into the Scriptures like nothing ever had. The Proclaimer had enough volume for everyone to hear and the dramatized version helped the people become part of the stories as they listened. Lives changed as the people experienced the Gospel in their heart language.

The power of the Audio Revolution was demonstrated as God’s Word in audio transformed the lives of people living on the Cambodian island of Tumnup. There was only one believer among the 90,000 inhabitants; a woman who had found Christ 10 years earlier. Though she believed, she rarely told anyone about her faith. Then, this woman’s daughter became very sick and she took her to a doctor on the mainland. On that trip, the woman encountered an FCOP partner who prayed for her daughter. The Lord answered those prayers and, when her daughter was healed, the woman was grateful and wanted to learn more about her healing God.

She invited a group of young people to come to the island and start Audio Bible listening groups because very few people could read or write. Hundreds of people responded to the Gospel and they began telling others about Jesus. In less than two years, 90% of the island’s inhabitants became believers and 250 churches sprung up. The churches use Audio Bibles as part of their weekly teaching and discipleship programs.

Pastor Ted says reaching that many people could not have been done with written Bibles; he is convinced that the Audio Bible is the answer for the lack of literacy in Cambodia and a huge advance for the Gospel. In a recent interview he said:

“I really think that anyone who is helped by a Proclaimer needs to understand they are on the cutting edge of the greatest thing since Gutenberg invented the printing press. It may be bigger than Gutenberg. I don’t think we really understand the value of it in most places in the world. But we sure do understand it now in Cambodia!”

He says Cambodia can use all the Audio Bibles they can get and added:

“Bring them over. We’ll put them to work. We would take thousands more and I guarantee that for every Proclaimer we get, we’ll get a thousand souls saved.”

There are many opportunities for you or your church to join the Audio Revolution by partnering with Faith Comes By Hearing to bring God’s Word to people around the world waiting to hear Him speak their heart language. Explore the website, pray for the ministry, donate, or call (800) 545-6552 for more information.

Image: A young man is excited to receive a Central Khmer Audio Bible.


“Thank you for sharing these Proclaimers with the people in this very poor, very remote, ‘mountain-beyond-the-mountain’ area that is overcoming the spiritual darkness of voodoo with the hope found in Christ. What a wonderful ministry!”