Bible Blog › From the Field › Encouragement from the Wreckage

Encouragement from the Wreckage 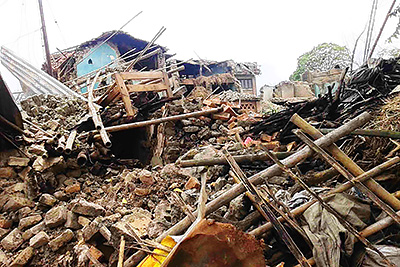 I was boarding a plane in the U.S. on April 24th for a 3-week trip through Asia, when I – like you perhaps – started hearing reports of the devastating earthquake in Nepal. This caught my attention as I was scheduled to be there 5 days later, after a brief stop in Thailand. Quickly, though, my mind changed to the Nepali people and our relationships with many ministry organizations, mostly based in Kathmandu. My heart was drawn to them and I wanted to continue my plans to go to Nepal and help out wherever possible.

Of course, those plans were changed and I never made it.

We learned much later that the event known as the Gorkha earthquake killed more than 9,000 people, injured more than 23,000, and had a magnitude of 7.8 to 8.1. Extremely violent indeed!

One of the recording teams was working on a project in Kathmandu when the earthquake hit. Here is what they had to say about their experiences during the aftermath:

[First message] “We are alive, but in trouble. Let you know details tomorrow. Thanks for your prayers.”

[Second message] “We were stuck under a roof while worship service was going on. The roof fell on all who attended the service. [My teammate] is having pain in his back and I am having pain in my left ankle; but we are not able to consult any doctor due to lack of doctors and medical facility.

We experienced so many times like we were floating and the earth was shaking. This has happened more than 70 times, as per Nepal radio news. Day and night all are staying in open spaces. There is fear for all. At any time anything may happen. Emergency is declared in the country and most foreigners are in the process of leaving. The people have already started to face difficulties for their basic needs such as power, water, cooking gas, etc.”

A couple of days later they were able to leave the country – which sounds easy – but that is another story for another time. Here is what they said about the people they met:

“We would ask your prayers for the Newar community. About 26 listening group leaders’ houses have been damaged, so they are living outside in tents. In some cases, the listening groups are also meeting in tents.

Twenty Proclaimers were damaged, but through God’s grace, and donors’ hearts, replacements for those audio devices are being carried into the country right now!”

God even used one of the undamaged Proclaimers to miraculously encourage a community of Newari people following the earthquake:

“A house belonging to one of the speakers collapsed in the earthquake. One day after the earthquake, while he and his family were removing the wood, bricks, and other things from the rubble to a safe place, they heard some sound. So they searched for the source of the sound from one point to the other. They could clearly hear the sound was in the Newari language, so they continued to search out where the sound was coming from.

Finally, they found out it was a Newari Proclaimer. They and their friends and neighbors around them were so surprised to see the Proclaimer, which is speaking their heart language.

Amazing God! Praise the Lord! God is working among the Newari community. Praying that they could hear God’s Word clearly at that time.”

FCBH continues to get reports of personal and material loss, even now. But one thing is clear: many of the people know God is good to those who have relied on Him for their continued well-being and spiritual growth through this trial.

Please continue to pray for the people of Nepal. Experts predict that another similar large-scale earthquake could happen in the near future as small tremors are reportedly continuing to this day.